Four out of one hundred.

Of the approximately one hundred bikes that I have, I ride on a relatively frequent basis, just four. I do ride some of the others but very infrequently. I keep them because each has some interesting feature. The four that I do ride all serve different purposes. 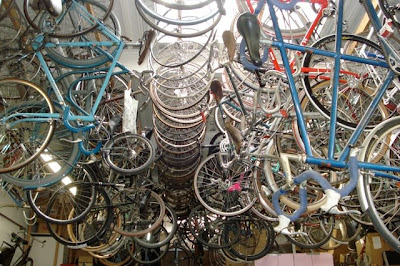 Some of the one hundred in the collection 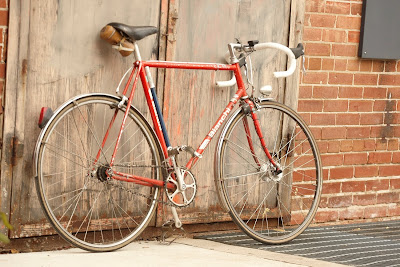 The most used is the Bianchi ‘treader’, my commuter and hack bike.
I assembled it around 1991, so it is getting on for twenty years old now. My previous treader had been stolen so I built up this Bianchi frame that I had got in a ‘deal’. My intention had been to use the frame until I got around to building a suitable Mariposa but that day still hasn’t come.

It is a great bike. It handles really well. My only complaint is that the toe clips overlap the front mudguard, which can be a problem but I seem to have managed.

The frame is a Bianchi “Nuovo Alloro” from about 1988. It is made with Bianchi “Formula Two” tubing which I think is Columbus SL.It has a single freewheel of 46x19 which is all I really need around Toronto, although I have noticed that the hill out of the valley is getting a bit steeper these days and if that continues I may have to add another tooth to the freewheel.
The front hub is a Shimano Nexus generator, that works really well. There is a photoelectric switch which switches the front and rear lights on when needed and off when not. It is great. I never have to think about it. The only problem has been two rear bulbs replaced in about fifteen years. The ‘drag’ is insignificant. 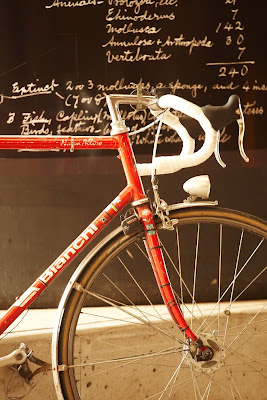 The Sanyo headlight powered by the hub generator. The black box behind the fork crown is the photoelectric switch.

The bike gets very little maintenance. The chain receives a drop of oil once in a while and the bike gets a hose down with the high-pressure washer when it gets really grubby.

In the twenty years that I have had it I have replaced the saddle - it broke, replaced the headset - the lower frame race cracked, and replaced two rims – they split along the braking surface. I’ve replaced a few tires and had a few punctures but probably not more punctures than one a year. At the moment I have Vittoria 700x23 tires fitted. I find that these hold the road well even in the snow.

The brakes are Tektro dual pivot. A few years ago I swapped the original Shimano 105 levers for Tektro. These are, I think, the best, most comfortable brake levers available. And they are cheap.


Mariposa "mountain bike". A bike built for the mountains. 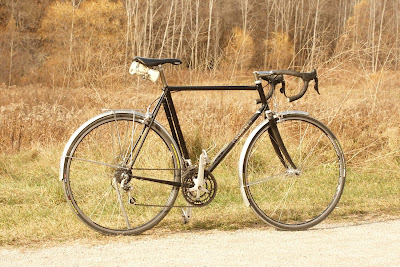 My favorite bike is my “mountain bike". It was built for my second successful attempt at the Raid Pyrenean in 2003. I put it together with the idea of keeping the weight to a minimum while including the features that I feel are necessary for the Raid.
Honjo mudguards were fitted as it always rains in the mountains and I made a small and light rear carrier to which spare clothes or rain gear can be strapped.

The frame is made from light Columbus KL tubing that was intended for pursuit bikes but has stood up very well and is certainly stiff enough for me. There is a carbon fork to keep the weight down.

I have Campag Record derailleurs with a TA Alize triple crankset and Ergopower levers
Gears are 13-26, 10 speed with 52/42/30 on the front.

The brakes are long reach Tektro dual pivot that give clearance for the mudguards.
This is the only bike I have with a threadless headset made necessary by the alloy steerer in the carbon fork. I have yet to see an attractive commercial stem that would fit so I made this one. It is chromed steel, light and I think attractive. The ‘bars are ITM. 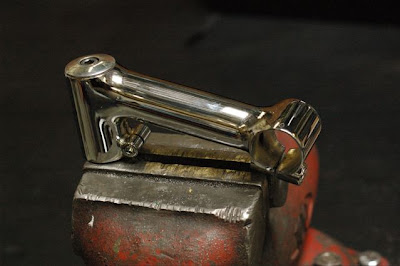 A Flite saddle is fitted to a Campag Ti post. The pedals are Dura Ace.

This is the lightest bike that I own and is a joy to ride. The weight complete with mudguards and carrier is 20 lbs. It is also the newest bike I have being only seven years old. 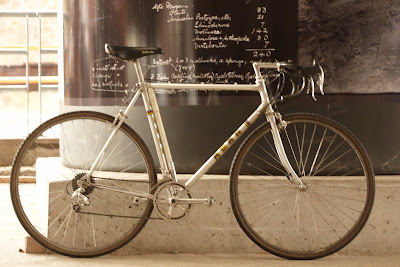 Cyclo-cross is one of my favorite forms of bike racing. I was instrumental in introducing cross to Canada in the sixties after having been an avid cyclo-cross rider in Britain. At Bicyclesport we formed a very successful team in the seventies and at that time I equipped myself with the “state of the art” cross bike of the period, an Alan

The Alans were the first aluminum racing bikes to be accepted by the pro peloton.. They were built with threaded tubes screwed into aluminum lugs and bonded with an adhesive. There had been aluminum bikes before but none were as well received as the Italian Alans. They were quite popular on the road but really made their name in cyclo-cross. Year after year the World Championship was won on Alan frames, very often with another manufacture’s decals fitted.

I got my Alan around 1976 and I am still riding it. Not too often these days, just for a bit of training “on the grass”.
Back in my racing days I used a single TA 46T chainwheel fitted with ‘cross guards’ and 14-28 six speed on the back. I had a Simplex derailleur with a bar end lever. Now I have 13-29 on the back and 42/50 on the front with Campag. Ergo power levers.
The Alan I have is one of their early cyclo-cross frames and does not have cantilever brake bosses. I have fitted Mafac centre-pull brakes which work perfectly well and I have never had them clog up with mud. I have Cinelli ‘bars and stem and a Turbo saddle fitted to a Campag ‘twin bolt’ post.

The original fork steering tube came ‘unbonded’ from the crown which although it didn’t come apart it didn’t allow me to steer in the direction I wished. Alan supplied me with a new fork.

The seat stays are bolted to the seat lug and one of the bolts did come out some years ago. It wasn’t until I looked at the photo of the seat lug taken recently that I realized that the screw is coming out again despite being stuck in with epoxy. It is easy to fix. 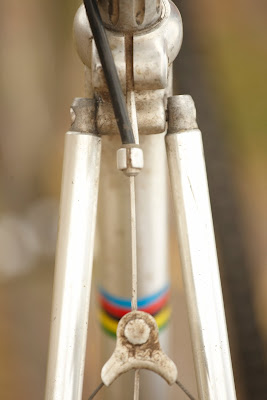 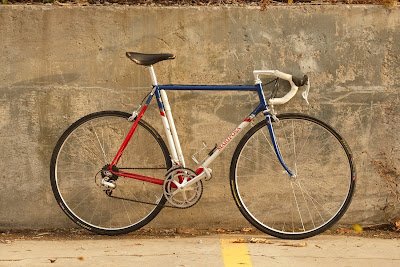 My road bike is now twenty seven years old and although not state of the art these days it still rides well and will probably outlast me. Although the frame is 27 years old it has had various groups of components fitted during that time.

It started out with French components, Simplex SLJ derailleurs, CLB brakes, Maillard hubs, Stronglight crankset and Ideale saddle. It did, however have Cinelli 'bars and stem.

When my son Michael grew into it he raced on it for a few years as a junior For a couple of seasons the team he was racing with was sponsered by Bridgestone and the bike was repainted and fitted with Bridgestone decals. The French components were exchanged for Shimano STI.

After that the bike was repainted into it's current finish, similar to the old Motorola Team colours. Michael had grown out of it and I fitted a Campagnolo 9 speed group with Ergo levers and that is the way it has remained.

It is a great bike to ride but is heavier than my "mountain bike'. I'm thinking of building up a pair of light tubular wheels to give myself a treat for next season.

All photos, except the photos of the stem and the collection were taken by Walter Lai. www.walterlaidesign.com
The stem photo was taken by Larry Strung. www.strungfoto.com
The collection photo by Mike Barry.

Walter Lai has just sent me these photos that he has taken of some of the parts in my collection.
What great photos they are, of some wonderful parts. 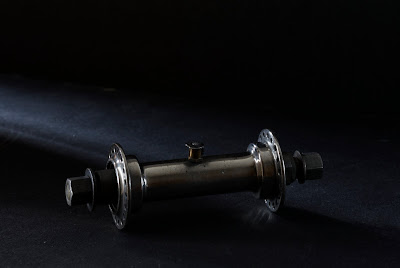 This is a CCM Prolight front hub from around 1935. The quality is excellent. It is nickel plated. That oiler is handy. One didn't use grease in those days, not if one wanted the most free running hubs 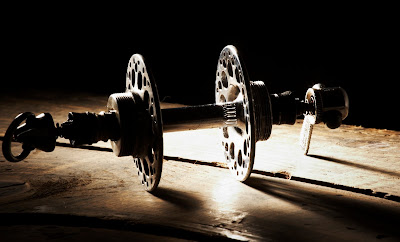 This is a Campagnolo large flange Gran Sport hub. Note that it is 'double sided' for fixed sprocket or for a multiple freewheel. 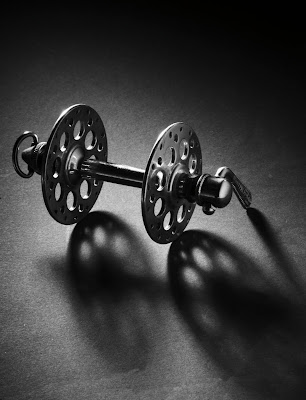 This is the matching front Campag GS hub. The pair is from around 1956 and are as smooth today as anything around.
The hubs have chrome steel barrels and aluminum flanges. They were made for Campagnolo by the Italian company FB.
The barrels are engraved with the Campagnolo trade mark and the flanges are engraved FB.
I think that these are just about the finest looking hubs ever. 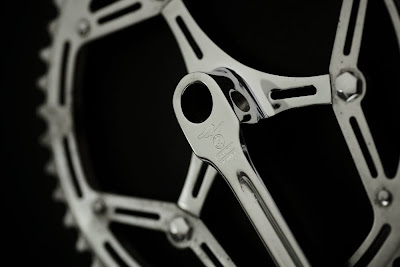 Gnutti was another Italian company that produced fine bike parts in the fifties. These slender, chromed steel cranks were a bit on the heavy side but sure looked beautiful.