After spending the day at the Ontario Provincial Cyclo-cross Championships in Riverdale Park in downtown Toronto, I am filled with enthusiasm. Despite the below zero temperatures and a covering of snow and ice there was a great turnout of both spectators and riders.

The last cyclo-cross I saw was probably the Canadian National Championships about five years ago. The difference between then and now is amazing. Then the Nationals was a pretty amateurishly run affair but todays event was very well organized. It was much like a European cross in many respects with even a beer tent, a live band, cow bells and even a group of guys in shorts and bare arms waving the yellow and black Lion of Flanders flag. 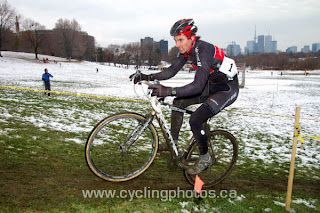 Mike Garrigan outclassed the rest of the field to become 2008 Ontario Champion.
Cyclo-cross has changed in all aspects. The number of riders is five times what it was even a few years ago and the increase in women riders about ten times. It was sad to see, however, that the number of juniors was about the same. The bikes used are, for most part, top line dedicated cross bikes whereas a few years ago most riders were using older modified road bikes.

In 1964 just after I arrived in Canada from England I, along with fellow Brit John Bayly, organized what I believe was the first cyclo-cross in Canada and perhaps in North America. It too was run in a City Park and we had about twenty competitors. From that event a season long schedule was established in the Toronto area and by the mid seventies there was enough activity to have Provincial and National Cyclo-cross Championships. Interest in the sport has fluctuated over the years but never has there been the interest in North America as there is now.

My introduction to Cyclo-cross was in the winter of 1954/5. The sport was just taking off in Britain and I was really keen to be involved as I was very keen on any type of cycling and was a competent cross country runner. To me, cyclo-cross was the ideal: thrilling and a beautiful combination of the two sports I love.

There were no cross bikes then and even cross tires were unavailable. Many riders used 650A wheels as knobby cycle speedway tyres were available in that size but most rode whatever they could get hold of. The Michelin "Endurance" was very popular as it had a quite knobby tread but nothing like the tread on modern cross tires. Almost everyone used a single freewheel with a gear of about 58" (48x22). At first no-one used toe clips (clipless pedals were of course unheard of). Double sided "rat trap" pedals were used as it was thought that clips and straps would slow you down when getting on and off the bike. It took a few years before derailleurs and toe clips became the norm. TA introduced cyclo-cross specific single chain wheels with attached flanges that prevented the chain from derailing. TA also made cyclo cross shoe plates (cleats) which had two long steel spikes to assist in running up hills. 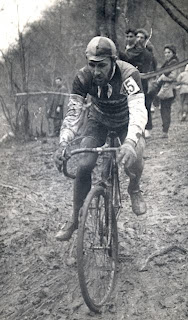 Don Stone. The Ace of cyclo-cross in England in the fifties. Note , no toe clips and a single free wheel. 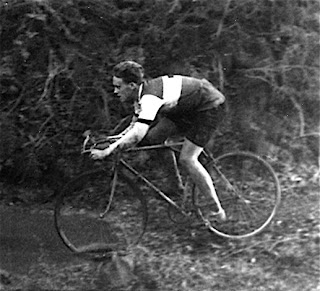 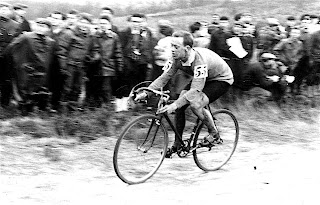 1958. Mike Barry. Now with a derailleur and clips and straps.

Almost everyone used the standard, at that time, leather cycling shoes and after the adoption of toe clips the TA shoe plates became standard. I was fortunate enough to know a custom athletic shoe maker and I talked him into making me a pair of special cyclo-cross shoes similar to the cross country running shoes he'd previously made for me. These had studs at the heal and provision for the TA shoe plates. It wasn't possible to have studs at the front of the shoes as it would not be possible to slide one's feet into the toe clips. I still have those shoes. Their existance fifty years on can probably be attributed to the liberal use of Kiwi shoe polish after each race. I haven't used them for a while though. 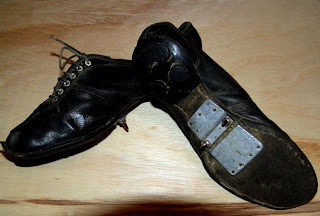 Those custom made cyclo-cross shoes

The most popular event in the London area was the Bagshot Scramble. This race was organized over Bagshot Heath which had been used as a military tank testing area during the second World War. It would attract a field of a couple of hundred riders who started all in one group. No categories for this event. The course's dominating feature was the death defying descent of the "Saddle Back", a 25% decline covered in large chunks of gravel. At the bottom of the Saddle Back there was a large bump which, when hit at speed sent riders airbourne. This bump sadly terminated my second and last ride in the Bagshot Scramble when my handlebars snapped in the middle when I hit it at a somewhat foolhardy speed. My enthusiasm for cross wasn't diminished however. I kept a keen interest and raced cyclo-cross each winter until I came to Canada. It was that enthusiasm for the sport that made me determined to see it established here.

In the eighties we set up the Bicyclesport-Mariposa cyclo-cross team and star member Ed Smolinski won a couple of National championships in our colours. Ed was smooth on the bike, an elegant runner and seemed at ease—like the best crossmen often are. Later in the early nineties the Bicyclesport Club junior team were dominant and son Michael was National Champion on a number of occasions. We had a great little community and after the event was over many of the riders would stick around to help tear down the course and load everything back into the van. On the way back home, a dozen or so of the diehard weekly cross riders would stop together for a coffee and doughnut. It was a warm little community that embraced every newcomer.

It was wonderful to see the enthusiasm for the race today both from the riders and their supporters and from the locals that happened upon it. It was a really good day out. Many thanks and congratulations should go to Stephane Marcotte and his team of helpers, to local legend Johnny 'Jet Fuel" Englar and to Ziggy Martuzalski of ZM Cycle & Fitness for a great event.

In forty years the sport has come a long way in North America in many respects but the nut of it, the heart of it, seems to still remain intact. And, that is really wonderful to see. 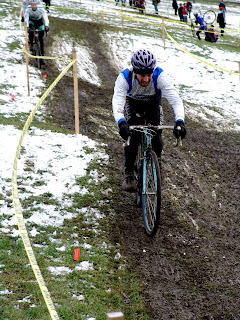 As expected the piece on helmets received more comments than any other post that I have put up.

For more information on the futility of mandatory helmet legislation go to:
www.vehicularcyclist.com

The Vehicular Cyclist is edited by friend Avery Burdett. It is Avery that we have to thank for fighting mandatory helmet legislation in Ontario.

Although any person under eighteen is required by law to wear a helmet it is my understanding that no one has ever been charged. Except, that is, for Dougie Kerr. Dougie was riding to work one day and was stopped by a young police officer and given a ticket for not having a helmet. Dougie does look younger than his sixty years but I don't think anyone would mistake him for a teenager. The young officer would hear nothing of Dougie's claim that the law applied only to those under eighteen. A few days later Dougie did get a call from the officer saying that he had dropped the charge. No apology of course.
Posted by Bicycle Specialties 7 comments: