My first half decent bike was a Raleigh Lenton Sports that I received when I was eleven. I was very proud of it especially so because it was advertised as being “Reg Harris’s Road model”. Reg Harris was five times World Sprint Champion and sponsored by Raleigh. I’m sure that the Lenton Sports that Reg used on the road had very little in common with my pride and joy. Mine was fitted with a Sturmey Archer four-speed hub gear. The fact that it had four gears rather than the usual three was another reason to be proud.
It wasn’t long however before I realized that if I wanted to be recognized as a real cyclist I would have to replace the hub gear with a derailleur. No true racing cyclist used a hub gear, unless of course they were sponsored by Raleigh who owned Sturmey Archer.
I managed to find a used Simplex “Tour de France’ derailleur with a three speed 16/18/20 freewheel. It didn’t matter that there were only three gears, which gave nowhere near the range that the four-speed hub gear did, it was a derailleur just like the aces rode.
That first Simplex got me fascinated with derailleurs, a fascination that has stayed with me ever since. 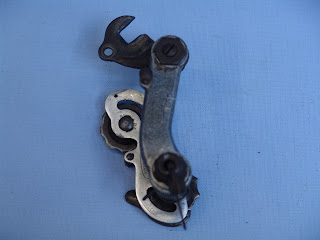 My first derailleur, a Simplex 'Tour de France' from the 1940s.

The principle of the derailleur is very simple. It is a mechanism that pushes the chain laterally to engage another sprocket. A very simple action but over the years there have been innumerable different types of mechanisms to accomplish it. The fact that one can see exactly what is happening, unlike a hub gear where the mechanism is totally enclosed, is the beauty of it. I have collected many examples and hope in the near future to put them together and create a virtual museum.
The French were the leaders in derailleur design from the twenties until the fifties when Campagnolo brought their Gran Sport model onto the scene. It is fascinating that until then the Italians persevered with very complicated devices that more often than not required the rider to back pedal while shifting gears with controls on the seat stays. The French, meanwhile, had perfectly good cable operated derailleurs, which could be operated while actually pedaling forward.
It is to Gino Bartali’s immense credit that he could win the Tour de France in 1938 and 1948 riding back pedaling derailleurs while all his non Italian competitors were using French Simplexes or Super Champions which operated in much the same manner as those we use today.
Bartali’s 1938 bike was equipped with a Vittoria Margherita derailleur. To change gear he would stop pedaling, reach down to a lever situated just above the front chainwheel, move the lever forward which took tension off the chain, and back pedal while simultaneously twisting a knob at the end of the tension lever. The knob operated a couple of flippers that moved the chain to another sprocket. When all this was finally accomplished he could re-tension the chain with the lever and commence pedaling forward again. 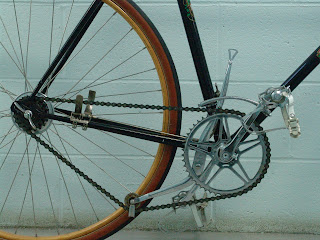 In 1948 he rode a Campagnolo Corsa derailleur that was equally bizarre. The Corsa had two levers situated on the seat stays. One of the levers was in effect an extended hub quick release lever, which released the rear wheel. With the wheel released the second lever was used to select one of the four rear sprockets. All this, of course, was accomplished while back pedaling. One had to remember to tighten the rear wheel again before pedaling forward or the wheel would be pulled out of the drop-outs. The French must have been most amused. 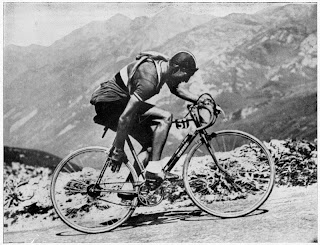 It is not any wonder that in 1949 Bartali turned up at the Tour with a cable operated forward pedaling Cervino derailleur. Apparently he helped finance an Italian company to make an almost exact copy of the French Super Champion. He didn’t win though as he was beaten by compatriot Fausto Coppi riding a Simplex. 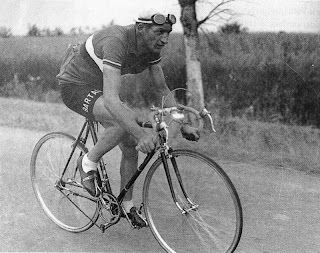 Recently my son Michael and his friend Chris Mathias were scanning the French ebay sight and came across a French bike that had a derailleur that wasn’t cable operated. They sent me the details. I was fascinated and had to have it for my collection. No one bid on it so I guess there are not too many nutters like me that would get excited about a scruffy 1935 French bike with a “derailleur sans cable”. 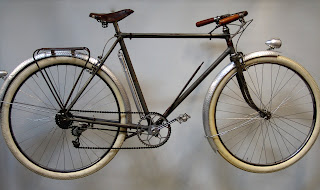 As you will see from the photo the derailleur is operated by a 16” long lever, which is pivoted at the bottom bracket and runs along the side of the down tube. I’d never seen anything like it before and did some research. The bike is a BGA, which stands for Blanchard-Grange Armes. It was made in St Etienne in around 1935. In those days St. Etienne was the centre of the French bicycle and arms industries. The bike is a typical French city bike fitted with 650B ‘demi ballon’ tires. The derailleur and brakes are ”Velectrik” which seems to be the house brand of Blanchard-Grange. The brakes are in effect “V” brakes, manufactured sixty years before Shimano reinvented them for mountain bikes.
A few years ago if I got a bike like this my first inclination would be to restore it to 'as new' condition. I now have a few ancient bikes, which look as if they just came off the production line. Now my thinking has changed. The BGA has its original paint and head badge. The chrome is a bit ratty but so it should be after 73 years. Everything, as far as I can tell, is original apart from the fenders and tires. The original fenders were missing when I got it and the tires were rotten. I had an old pair of French Lefol fenders, which seemed to fit the bill and the white 650B Wolbers made the whole thing look quite smart.
The derailleur works “just like Campag” and there isn’t much chance of breaking a cable. The brakes can be operated with one finger. Have bikes progressed very far in the last seventy years? When the snow goes I will report on my first decent test ride. 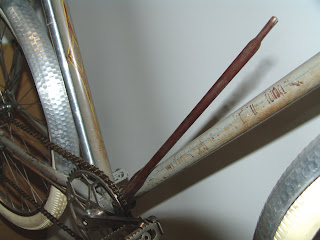 The longest gear lever ever. 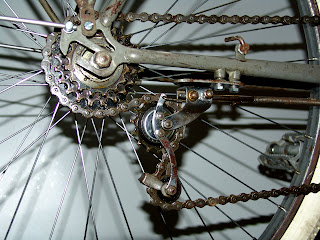 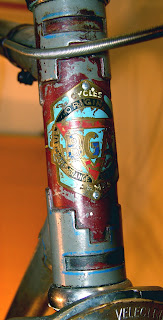