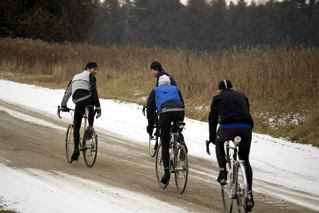 Now we are back in Toronto. While we were in Spain there had been some brutal weather here but for our first few days back it was relatively mild. Last Sunday it was about five degrees C so friends Dougie, Noah and I decided to make the most of it and get a few kilometres in.

In recent years cycling out of Toronto has become pretty miserable with traffic. We now almost always drive out to the outskirts and ride from there. The countryside is still remarkably close and after half an hour in the car we are in quiet country roads. On Sunday we decided on our usual ride from the Toronto Zoo and then up to Goodwood which is North East of the City. The roads are quite quiet and quieter still if we choose the gravel ones. This time we decided to stay on the pavement as we feared that the recent weather would have made the gravel roads rather messy. 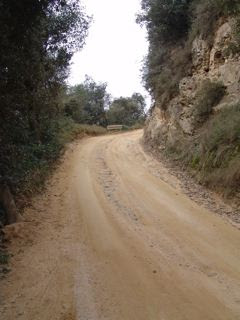 A strong wind out of the east made the ride tough and it was a bit of a struggle over the rolling hills. The cafe in Goodwood is a great place to stop. The coffee, food and service is always excellent. Soon after we arrived another group of a dozen or so riders turned up. They were a group from the Jet Fuel Team who were out getting some early season training miles in. We spent a pleasant half hour or so chatting. On leaving Goodwood there are two roads to take South. One is HWY 47 which is always busy with fast moving traffic and the other is Concession Road 3 which is gravel. We decided that gravel was preferable to traffic. It turned out that the road was in great shape, well packed down and almost as smooth as tarmac. Why would anyone choose riding on Hwy 47 when they can ride this quiet country road.

Riding on roads with a lot of traffic means that you are forced to ride in single file with cars, trucks and buses thundering by. What pleasure is there in that? But most cyclists will not dream of going on the gravel roads. Sometimes, usually just after the "improvement truck" has been through, the surface can be loose and a bit dodgy but if one relaxes it is not too bad. One doesn't need fat tires. Everyone in our group rides 700 x 23s. although I'm sure something a bit fatter would be preferable. On this occasion we stayed on the gravel almost all the way back. We saw almost no cars, we were sheltered from the wind by forest for most of the way, and were able to ride two abreast and chat without worrying about the traffic.

Like riding in a close knit group, riding on gravel roads requires practice. One has to learn to relax if the surface is loose. But the advantages are many. The gravel roads generally take you into farmland away from housing. The roads are much more interesting as they are more likely to have curves and hills and they generally take you deeper into the beautiful Ontario countryside.

Remember gravel is a lot safer than traffic.

Email ThisBlogThis!Share to TwitterShare to FacebookShare to Pinterest
Labels: Ontario., Riding the gravel roads near Goodwood 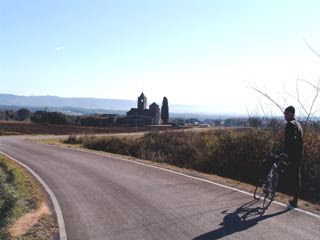 I closed the shop doors for the last time on Saturday the 22nd of December and the next day Clare and I flew to Spain to spend Christmas with our son Michael and his family in Girona.

The final Saturday was a good day. Many friends came by to wish me well, enjoy a celebratory drink, and reminisce about time spent in the shops. It was a shame that Tom was not there. He had been with me for 17 years and he certainly deserved many of the thanks and good wishes. Tom has moved on to a new career but I hope that he hasn’t left the bike for good and that we shall see him out again before too long.

We have had a wonderful Christmas in Girona with Michael, Dede, Liam and Ashlin. Michael is training hard with four or five hour rides most days. I’ve managed a few rides of two or three hours but I am pretty unfit and I am certainly struggling on the hills. However the weather is great and it is a real treat to be able to get a few rides in at this time of year.

On a couple of the rides I started out with Michael and turned off after a half hour or so. One day, when he didn’t need to train hard he rode two hours with me. Of course it is always a treat to ride with one’s son especially in such wonderful countryside. It is also a treat because he never makes me feel as if I’m holding him back. We ride side beside, elbows almost touching, chatting. At least he is chatting I’m often finding it a bit difficult to chat when I’m climbing the hills. What a great way to spend some time with one’s son, just doing what we both enjoy most in life.

This got me thinking. It seems to me that many cyclists do not experience what is to me probably the finest aspect of cycling. That is riding in company in a tight group, side by side, enjoying one another’s company. Most cyclists I see are riding separate. Even those that are obviously out "together" are not riding close enough to chat or perhaps more importantly, not getting the drafting advantage of riding close behind a rider in front. A group of six or more is ideal with the riders in pairs riding two abreast, never three. The lead is shared with the front pair swinging off and going to the back of the group after perhaps a kilometer or two. The time at the front will change depending upon the conditions. If there is a strong head wind then time at the front will be less. If conditions are really favourable then the lead will change less often. If one of the riders is having a hard time then he/she should be sheltered at the back out of the wind. In this manner distances can be covered more easily and more enjoyably.

In recent years we have had many people taking up cycling that have never had the benefit of an organized club or have come to road cycling from mountain biking or triathlon neither of which discipline encourages group riding. Also it seems that to many cycling is just a way to get fit. What a lot they are missing, as there are so many aspects to cycling that they will never experience. Riding together in a close group is probably the most important.

Here in Girona everyday we see a group of retired men that meet to ride. There are about twenty of them, most in their sixties and seventies, they meet at a local bar/cafÈ and finish their ride at the same spot. They ride out in a group for about thirty of forty kilometres to a restaurant where they have a very social hefty Catalan lunch and perhaps a drink or two before riding home. They return home after spending a few hours in conversation with friends and having got in some good exercise. Not a bad way to spend your day. I’m sure that most get encouragement from both their doctors and their wives but foremost I think ride because they love the social aspects.

I started cycling with a club in London, England and I was immediately taught the benefits of group riding. Of course it takes a while before one is comfortable riding close to others but with a little practice it becomes second nature and you will get so much more enjoyment from this wonderful sport and pastime.

We return home to Canada in a couple of days. It will be strange not having to be at the shop everyday. I will however, still have some mail orders to take care of as I intend keeping that going. I also have many restorations and projects I am eager to get to work on—and I hope to write a bit about those in the coming weeks.

I’m sure the weather in Toronto won’t be conducive to cycling but when it isn’t then I will put on the running shoes and try to get fit for those group rides in the Spring. Even on a cold spring day, the thought of riding in a small group, chatting with friends, stopping for a coffee and cake gets me dressed up, out the door and on the bike.

Happy New Year to you all.
Mike.
Posted by Bicycle Specialties 4 comments: