As many of you that have read my previous postings will know I have a keen interest in the history of derailleur gears and have accumulated a sizeable collection.

It has been suggested that I write a little about interesting models on a regular basis. This I will try to do in the hope that some of you will also find the subject interesting.

My first derailleur was an early French Simplex Tour de France model which I fitted to my Raleigh Lenton Sports in place of its original Sturmey Archer four speed hub gear. The Simplex was a three speed and had a much closer range of ratios than the Sturmey but it was a derailleur and that is what all the racing men used. 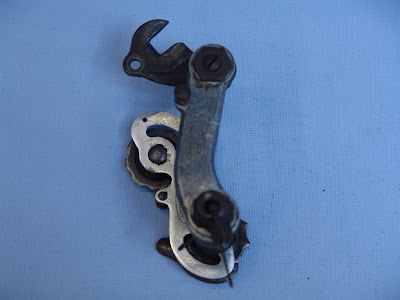 The Simplex Tour de France was the most popular racing derailleur in the period following the second World War. It was used by many of the top riders of the day including the Tour de France winners Robic in 1947, Coppi in 1949 and Kubler in 1950. 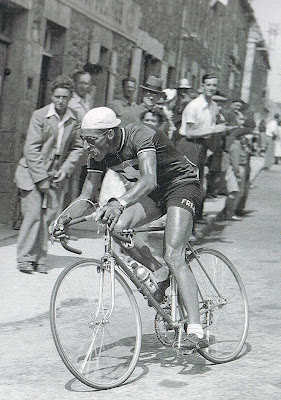 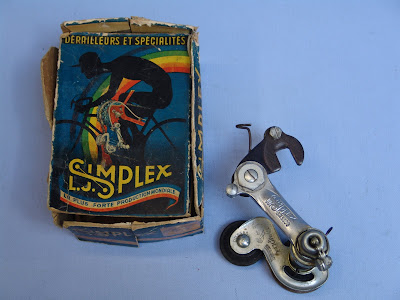 A 1950 TdeF with it's wonderful presentation box.

An exploded view of the TdeF derailleur.

Like most derailleurs in the forties and fifties The Tour de France is a "push rod" design. The derailing cage with it's pulleys is attached to the end of a telescoping shaft. The cable is attached to the other end of the shaft by means of a toggle chain. Pulling the cable pulls the derailing cage to the next smaller sprocket. When the cable is released a large coil spring pushes the cage back. This central coil spring also applies tension to the chain.

The big advantage that the Simplex had over it's rivals was a second chain tensioning spring and pivot at the upper end of the main arm. This spring loaded pivot ensures that the upper pulley remains close to the sprockets irrespective of sprocket size. The close coupling of pulley and sprocket ensures crisp gear changes.

There is a nut at the end of the shaft that holds the whole mechanism together. It was not unknown for this nut to come off the shaft whereupon the spring shot a multitude of parts across the road much to the despair of the rider and the hilarity of his riding companions.

The patented "two sprung pivots" design was peculiar to Simplex from its introduction in 1946 TdeF model right through the Simplex range until the company's demise in the late eighties. Now all derailleurs use this design. 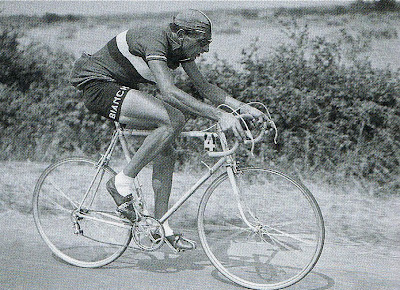 During their hey-day Simplex had factories in Italy and Germany. No doubt Coppi used Italian made Simplex which were somewhat better finished than those made in the parent factory in Dijon.

For it's time the Simplex Tour de France was a relatively reliable and efficient mechanism. The UK distributer described it in their advertisements as: "The gear with guts and glamour".