Back in May 2008 I posted here a piece on a bike I had put together with some interesting components. My good friend John Palmer had got me going on it when he gave me a pair of Palladini hubs which had a wonderful history.

The Torpado was one of those many projects that get started but never quite finished. Now some twenty months later I'm happy to say that the Torpado is complete. 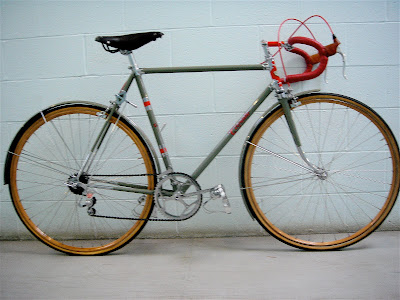 Mudguards and a front derailleur have been fitted. The mudguards are the same as those fitted to the Bianchi in the previous post. Again they were given a nice paint job by Noah at Velocolour. 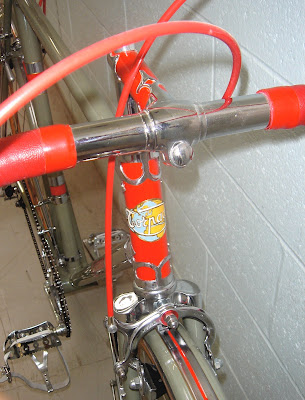 It is such a nice looking bike. The stem is English and really shouldn't be on an Italian bike but it seemed to be just the right match. 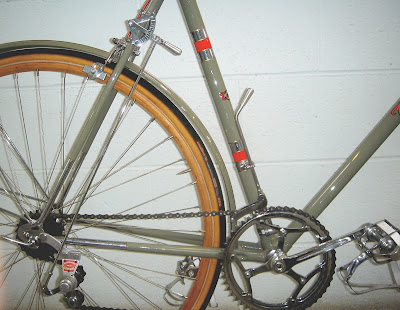 Missing was a Lucchini front derailleur to match the rear. I couldn't track down any evidence that Lucchini ever made one. Steven Massland's very interesting Soncini has the only other Lucchini rear derailleur I have ever seen and that bike does have two chainwheels. 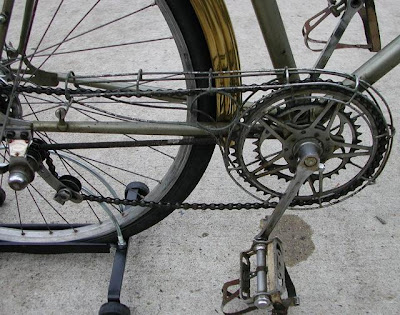 However there doesn't seem to be any method of moving the chain from one chainwheel to the other.
I could have fitted the Torpado with any one of numerous old front derailleurs that I have but none seemed quite appropriate. The only thing to do was to make one. 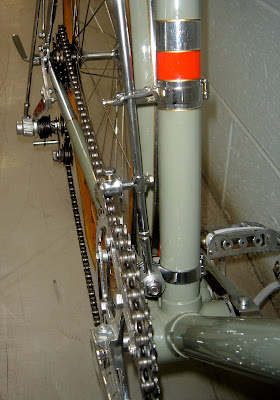 The result is a front derailleur that somewhat matches the rear and is as I think Signor Lucchini would have made it if he had just got around to doing it. 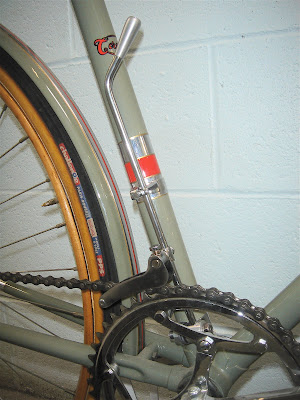 It works reasonably well, smartly moving the chain from the 47T to the 50T chainrings. Not exactly Ergopower but then neither is the rear

The Torpado is now ready for the road and I hope to have it out on the next No-Click Club ride in March.

If you are interested in seeing more of Steven's interesting Soncini go to:
http://www.wooljersey.com/gallery/v/maasland/1947_Soncini_City_Bike
Posted by Bicycle Specialties 4 comments:

A mixture of old and new(ish)

Now that Michael, Dede and their family are living permanently in Girona my wife Clare and I are making several trans-Atlantic flights a year. The cost of bringing a bike is getting prohibitive. A couple of weeks before I left this time I decided to leave a bike here. There was a spare Chorus group in Girona so all I needed to take over was a frame and a few parts. I sorted through what I had at the shop and came up with a 1988 Bianchi SL frame. Close inspection revealed why it had been hanging up on a hook in the ceiling for years, there was a crack in the bottom bracket shell. I cut the old shell out and brazed in a new one. There was no Bianchi fork but I had an NOS Cinelli B fork from around 1970. I asked Noah Rosen (Velocolour) to give the frame, fork, Silca pump and some appropriate Italian mudguards a paint job in the old Coppi era celeste with vintage decals. I now have a great retro looking bike with a relatively modern ten speed Ergo group. The best of both Worlds I reckon. 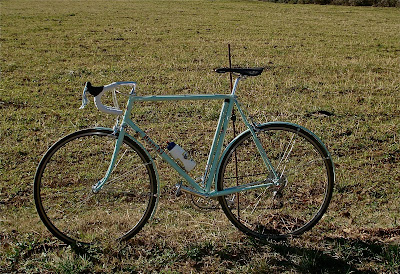 A pause for a rest on the road to Rocacorba 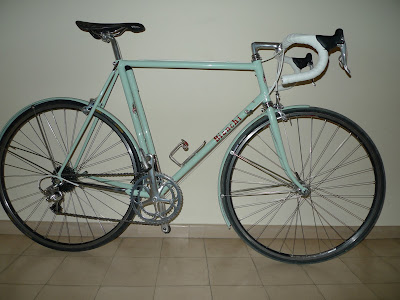 .
Noah at Velocolour did a great job bringing the old frame back to life. 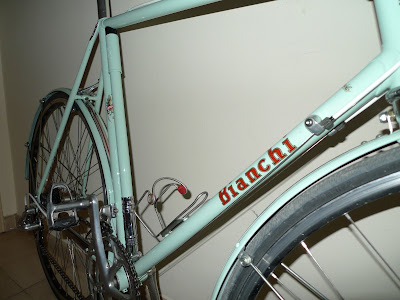 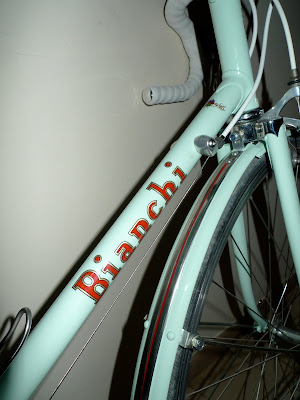 Fenders are not a bad idea even in Spain in the winter.
Posted by Bicycle Specialties 6 comments: