Ken Smith and Cycling in the Sixties

Over the many years that I have been involved in cycling there have been a few people that have stood out as being those that did all the work of organizing the sport. Usually they have been modest riders themselves but have a deep love of cycling and want the sport to flourish.

Recently Clare and I went to the 90th birthday party for Ken Smith. There were almost a hundred people there many of whom were bike riders who have the utmost respect for Ken and all the work he has done for the sport.

Soon after I arrived in Canada in 1964 I went to Ken and his wife Nancy’s apartment. Ken ran the Ontario Cycling Association from his kitchen table. I paid him $2.00 to be a member and another $1.00 for a years racing license. My introduction to Ken and Nancy was the beginning of a wonderful friendship that still exists today, 46 years later. Sadly Nancy is no longer with us.

During the sixties there was a large influx of European immigrants to Ontario. Those that arrived with their racing bikes usually found their way to Ken’s apartment to get a racing license. Especially if the new arrivals were from Britain Nancy took them under her wing and before long they were invited to dinner. I spent many good evenings there being fed good English meals including a couple of wonderful Christmas dinners. 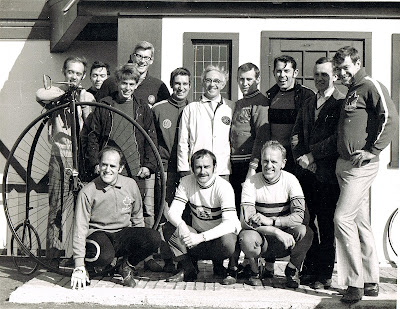 A group of the ex-Brit bike riders at a Ken Smith promotion, the end of season "Gentleman's Race". Ken is in the centre in the light coloured jacket. There are a number of Olympians and an ex-pro in the group. Mike Barry is on the left with the bike that he rode that day.


Ken issued all the racing licenses, organized many of the races and was more often than not officiating at those that he hadn’t organized. He put out a monthly newsletter and did all the necessary communication with the national governing body; The Canadian Wheelmans’ Association in Ottawa. Remember that this was long before computers. Ken typed all the correspondence and the newsletter on his trusty Underwood typewriter and then printed the newsletter on an old, hand cranked Gestetner duplicator. All this work was completely voluntary and consumed almost every evening after a day’s work as an office manager for an instrument company.

Ken, Nancy and their very young daughter Cheryl immigrated to Canada from England in 1957. They had been keen members of the Balham Cycling Club in South London. Ken was a keen racer but he and Nancy also spent much time touring on their tandem even, for a couple of years, with Cheryl in a sidecar. 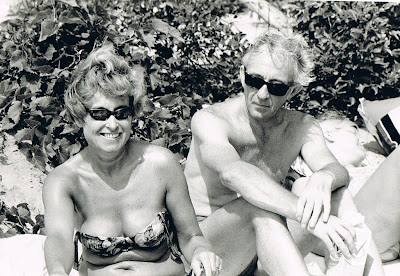 Ken and Nancy Smith enjoying the sun at Woodlands Beach, Ontario in the later sixties.
Ken looks as if he would prefer to be out on the bike.

On arrival in Canada it was not long before he was a member of the cycling community, which was small but very enthusiastic. Ken soon became involved as a race organizer and then as chairman of the Ontario Wheelman's Association.

One of the first races that I rode after arriving in Canada was the “Toronto to Owen Sound”. It was a terrific event, sponsored by Labbatt’s Brewery and organized by Ken Smith. It started on the outskirts of Toronto and went north for 110 miles (176 kms.). There were police motor cycle outriders conducting a rolling closure of the road for the whole route and the finish was before a good crowd of spectators on Owen Sound’s closed off main street. I thought that I had arrived in cycling heaven. It was better than almost anything that I had ridden in my ten years of racing in England.

After the finish and prize presentation all the riders were invited to a pool party at a downtown hotel where the sponsor made sure we enjoyed their product even though Owen Sound was a “dry town”. It was then announced that there was to be an evening criterium to be held on the local horse race track. After a good few Labbatts all the riders were keen to have a go and were not too put off by the fact that the track surface was fine loose red shale. Perhaps not a bad surface for horses but not ideal for narrow road bike tires. It was a very warm evening and after a few laps we were all sweating profusely. The shale dust coated us so that we were almost unrecognizable at the finish.

The Toronto-Owen Sound was the first of similar events that Ken organized including Toronto-London and Toronto-Brantford. He organized criteriums in shopping plazas, evening time trials and end of season socials. There seemed to be no end to his enthusiasm and energy.

All this did not go unnoticed by the National officials in Ottawa and in 1971 Ken was offered the job as executive director of the Canadian Cycling Association. He was now to be paid for what he had been doing free for years. He and Nancy moved to Ottawa. The Ontario Association lost and National Association gained.

After many years working for the Cycling Association, including the years in which Canada held the World Championships and the Olympics, Ken decided he needed a change and he became director of “non-resident sports”. This involved looking after the affairs of the sports that didn’t have enough participants to warrant an office and staff in the Sports Centre. This included sky diving, lawn bowling and cricket amongst others. He very much enjoyed his association with cricket as that game had been one of his passions in England.

During his time at the Sports Centre Ken commuted back and forth from his home in Manotick on his bike with a fixed gear. The distance is around fifty kilometers round trip which kept him in good shape. When he retired from the centre at age sixty five he rode a twelve hour marathon on rollers to raise money for charity. He was still riding his bike into his eighties but now, unfortunately, has had to give it up. 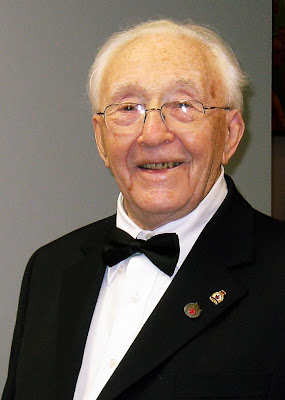 Ken at his 90th birthday celebrations


After all his experiences in a life involved with the sport Ken remembers the time in Toronto in the sixties as being the most enjoyable.
Posted by Bicycle Specialties 2 comments: