We have spent a lot of time with our family in Europe these past couple of months. Most of the time we have been in Girona, Spain but we did spend four days following the late season bike races and visiting museums in Italy. (See previous post “Museums in Italy”).

I didn’t get as much bike riding in during this these visits as I usually do. During our first visit in October the weather wasn’t too conducive a lot of the time but when I did get out I rode daughter-in-law, Dede’s “wet weather and dirt road bike”. Dede’s position is just about the same as mine so when I borrow one of her bikes it fits just about perfectly. 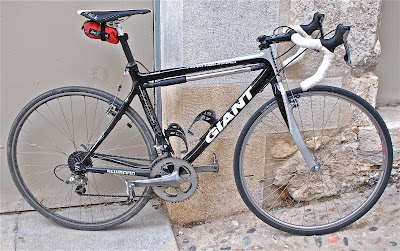 
The bike I rode was originally intended for Columbia pro Bert Grabsch to ride in the 2008 Paris-Roubaix should the course turn out to be wet and muddy. As it happens the day turned out to be dry and fine so he rode his regular road bike and the wet weather bike remained unused. At the end of the season the unused wet weather bikes were offered for sale to team members so Michael bought two, one for himself and another for Dede. Like me Michael and Dede like to ride the back roads and are not put off by gravel surfaces. These bikes are ideal for that purpose. There is clearance for mudguards and Michael has them fitted but he hadn’t got around to fitting them to Dede’s by the time I was riding it.

The bike has a Giant carbon frame and is Dura-Ace equipped with cantilever brakes to give mud clearance. I haven’t ridden a carbon bike any distance before so I was anxious to find out how it rides. I got a rude awakening as soon as we left the house and descended the cobbled 20% hill down to the town centre. The brakes were really bad and the rigid forks made riding the moderate cobbles very uncomfortable.

This is a bike that was prepared by arguably the top team in the sport to be used on the infamous cobbles of Paris-Roubaix. One would think that a fork with some flex in it would be chosen but this fork, although carbon, is super rigid. Maybe they thought that the extra layer of handlebar tape would absorb all the shock. The brakes were frighteningly bad although I was able to improve them a bit by reducing the spring tension. I may be able to improve them further by adjusting the cable/straddle set up. I will play around with them again to see if any more improvement can be made. Meanwhile Dede will be able to stop but not with the same efficiency as she is used to with her dual pivot brakes.

I have ridden the cobbles of Paris-Roubaix and it is truly amazing to me that the pros can ride them at the speed that they do. One would think that all the teams would make every attempt to have the bikes set up to absorb as much shock as possible. Some do: Specialized had polymer, shock absorbing inserts in their forks and stays and the earlier Treks which Michael rode in 2006 had shock absorbers in the seat stays. Michael says that these bikes were around for only a couple of seasons as the polymer inserts made no noticeable improvement.

A few years ago there was a period when almost all P-R bikes had suspension forks. Most of the winners in the early nineties used them. Now they are not used at all except on a few of the Cannondale bikes. Michael, who has ridden two Paris-Roubaixs, says that he believes that with the suspension the rider doesn’t have the same degree of control that one has on a standard road bike. And, of course during the hectic battle for the best line in those cobbled ‘sectors’ control is paramount.

The bikes need to be quick and responsive on the pavement and as comfortable as possible on the cobbles. Now, most of the top contenders ride standard bikes, some with a little more clearance, with bigger tires run at low pressure. Michael tells me the tire pressure makes the biggest difference on the cobbles. 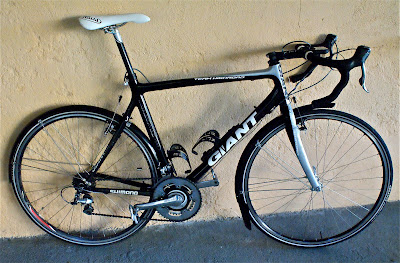 Julien DeVries, the Discovery Team mechanic, has worked with generations of champions ,from Eddy Merckx to Greg Lemond to George Hincapie, and when Michael rode Julien was responsible for their bikes for the race. While looking over their bikes beforehand he advised the riders against any changes to what he suggested: a single roll of tape on the bars, no extra brake levers, standard box section 32 spoke wheels, and his aged tubular tires. He turned his nose up at any other addition to the bike to improve comfort as it only detracts from the performance. After riding a few additions Michael said he was in agreement. Pressure, quality and care of the tires could make all the difference. The rest was superfluous. 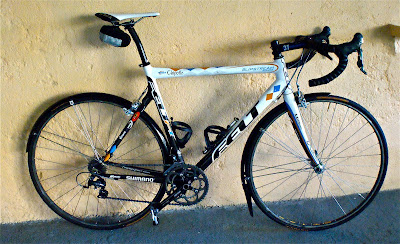 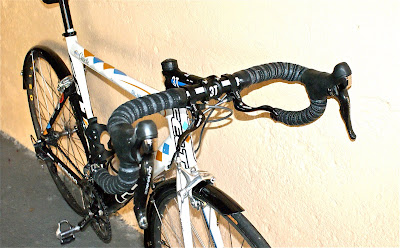 David's bike does have some of the equipment that Julien de Vries terms "superfluous" like auxilliary brake levers and padded tape.

Unless one has actually experienced the cobbled roads of P-R I don’t think it possible to comprehend how bad they are. The stretches of cobbles found in city streets are as smooth as silk when compared to the Arenberg. Apparently it is easier when one rides them fast. I guess it must be. The pros go over them at fifty km/h-- I found them just about impossible at twenty. One can get a inkling of how bad it is at: www.youtube.com/watch?v=G8uyPnIveJo

However apart from the poor brakes the Giant was nice to ride once on the smooth roads. It was lighter than my own steel Mariposas but I didn’t seem to go up the hills any quicker. With the mudguards fitted it will be a great bike for Dede to explore the narrow gravel Catalan mountain roads with Michael.
Posted by Bicycle Specialties 2 comments: