In the early fifties and I was a kid living in London with very little money but an intense interest in everything cycling. My cycling mates and I would ride around London visiting all the bike shops. We could not afford to buy anything but just looking at the wonderful bike equipment was a favourite occupation. The shop we visited most was the Cyclecraft shop in Chiswick that had a display of marvelous Cinellis. The finish, chrome work and super clean lines were outstanding. To this day I still think that those early Cinellis were the finest looking bikes ever.

When I started bike racing in 1954 there were three governing organizations for the sport in Britain: the Road Time Trials Council (RTTC) administered almost all the time trials in the country: the National Cyclists Union (NCU) controlled all track racing and circuit racing which was usually on disused wartime airfields. An upstart group, the British League of Racing Cyclists (BLRC), was formed in the forties to promote continental style massed start racing on the open road. Until the BLRC came along massed start racing on the open roads was effectively banned in Britain and had been since the turn of the century. The founders of the League discovered that there was no law preventing bike racing on the open roads so within a short time they were organizing major races all around the country.
This caused a big split in the cycling community. The BLRC members felt that the NCU was holding the sport back and the NCU members felt that the BLRC would bring the end to all organized racing. Anyone that joined the BLRC (the League) was banned from riding NCU races. The Union was the only organization recognized by the UCI therefore anyone with any hope of riding for Britain was forced to race Union events.
League members tended to be young, keen on all things continental and fervent jazz fans. If two opposing groups of cyclists passed on the road a cry of “up the League” came from the League group, which attracted a rather obscene response from the Union side.
Although I started my cycling with a Union club I was attracted to the League, I was young, Coppi was my hero, the Continent was where the sport's greatest moments unfolded and I was beginning to become interested in jazz. Each month I would wait anxiously for the latest edition of the “Leaguer”, the official magazine of the organization. It was delivered to my home by John Gough a devout Leaguer himself who pedaled around our area dropping off copies to all fellow League disciples.
John rode a wonderful Cinelli, which was a very unusual bike in London at that time. Most of us rode local built bikes, Claud Butlers, Holdsworths, Allins, Algurns and in my case a very nice Stuart Purves. All were good bikes but the Cinelli that was so much more attractive. The first time John arrived at the house the bike was fitted with a Campag Corsa derailleur. It was an outstanding machine. He had the bike custom built in 1951 with the special Campag Corsa drop-outs. On each of John’s monthly visits I drooled over the Cinelli. He was even good enough to let me ride it and attempt the intricacies of changing the Corsa derailleur. 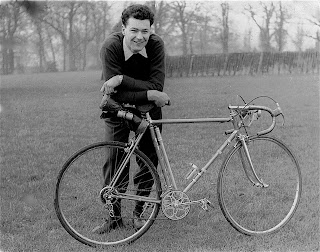 John Gough with the Cinelli, fitted with a Campag Gran Sport derailleur, 1952 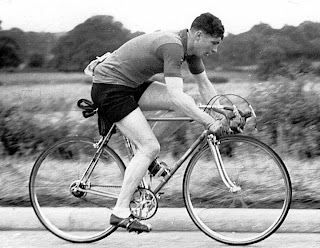 John Gough competing in the Coulsdon-Brighton Time Trial on the Cinelli, with a Campag Corsa derailleur. 1951 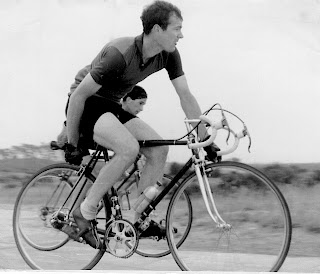 Changing gear on the Cinelli, now fitted with a Campag Paris-Roubaix derailleur and painted blue. 1955 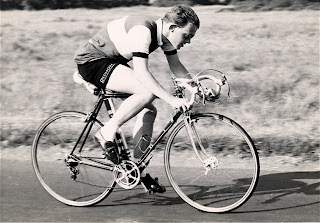 
Then on one visit John said he wanted to sell the frame. I jumped at the opportunity to buy it and put the Purves aside and used the Cinelli for all my racing.

One time while carrying the bike to a race on an improvised rack on the back of my Lambretta motor scooter, I hit a pot hole in the road and with a loud crack the right hand chainstay broke. It was more a problem with my rack design than with the frame. I had it repaired but a few years later I found a new Cinelli irresistible and the old one was put aside.
I kept the old frame and eventually brought it to Canada and rode it until the seat tube and bottom bracket cracked. I repaired it and had it repainted but unhappy with the paint job I never rode it again. It hung on a hook in the workshop waiting for the day when I would get it restored properly. Recently (twenty five years later) I took it down, had it rechromed and gave it to Noah (Velocolour) to refinish the way it was when I raced it fifty years ago. It had been beige in 1951 when John bought it but he had had it repainted dark blue by the time I got it. There has been some discussion as to which colour it should be now and eventually I decided on the blue. I imagine many Cinelli enthusiasts will be aghast that I didn't have it repainted in the original biege but I wanted it how I remembered it. 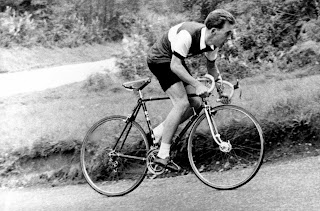 Mike Barry competing on the Cinelli in the Ranmore Hillclimb, 1958

It is now built up with almost the same components as it had in 1958. Some parts are the actual ones I used then. I think it looks better now than it ever did thanks to Noah’s paint job. 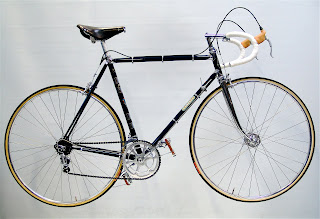 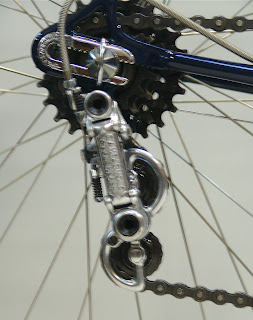 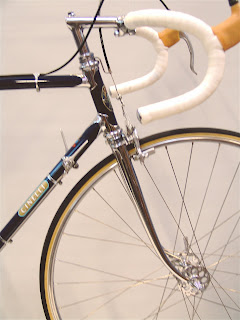 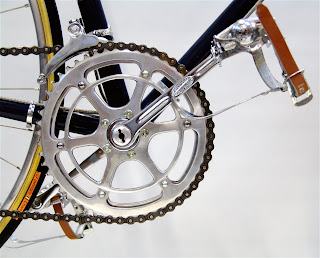 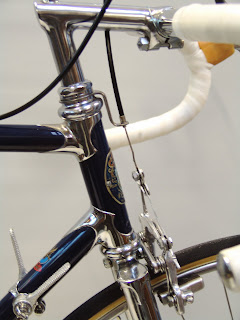 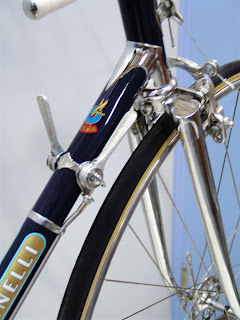 Noah Rosen of Velocolour did a great job with the restoration. His attention to detail is second to none. You can see more of his work at: velocolour.com
Posted by Bicycle Specialties 11 comments:

I have just received a copy of the marvelous book "The Competition Bicycle" by Jan Heine. It is a wonderful follow up to his previous book "The Golden Age of Handbuilt Bicycles".


Both books are filled with superb photographs by Jean-Pierre Praderes. I don't think I have ever seen better photos of bikes. The Golden Age book only shows French touring bikes. I have no problem with that. It is just that I feel that the title is a little misleading. It should be "The Golden Age of French Touring Bicycles". After all there were a few good handbuilt bicycles built elsewhere.

‘The Competition Bicycle’ however deals with just that, the racing bike, although including the Paris newspaper couriers' bike is a bit of a stretch. Those bikes were everyday work bikes that for one day each year were used in a race organized for them.
My one irritation about the book is the photo on the flysheet, the photo of Eddy Merckx's bike.

Eddy Merckx's bike as shown in 'The Competition Bicycle'.

In my humble opinion Merckx's bike was just about the finest looking bike ever. The proportions were perfect and it was from an era when all parts were simple and clean. No extra cables from Ergo/STI levers, no ugly threadless stems, perfect 32 spoke wheels with simple rims not covered in advertising and frame tubes of classic dimensions. Even the decals are clean and simple. I think Jan Heine must agree with me on this otherwise he wouldn't have used the photo on the cover and in all his advertising for the book. However the image is spoilt by the position of the saddle. Merckx would never have ridden it with the saddle so low. It is about five centimetres below where Eddy would have positioned it. 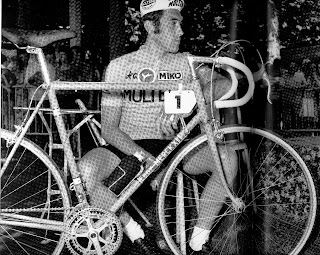 Eddy Merckx with his perfect bike.


Apparently after the bike was ridden by Eddy to win the '74 World Championship in Montreal it was presented to the Pope. The Pope then passed it on to a priest who was a bit of a cyclist. He apparently rode it a few times and then presented to the cyclists’ chapel of Madonna de Ghisallo.

Why when Jan Heine and Jean Pierre Pradares photographed the bike didn't they put the saddle back to Eddy's position? Jan is very knowledgeable and must have realized that it was wrong.

I haven't yet finished reading the book completely but Jan obviously knows the subject really well. I have only found one mistake in the text so far and that is one concerning the operation of the Cervino derailleur. A very minor mistake that only someone as obsessive as me about derailleurs would pick up on.

Both Heine's books are great and anyone with a keen interest in classic bikes should have them on their bookshelf.
I just wish I could get that saddle repositioned.

Both books are available from: www.vintagebicyclepress.com.
Posted by Bicycle Specialties 9 comments: