I recently attended the North American Hand-built Bike Show (NAHBS) in Indianapolis. I do not think that there is any doubt that most of the World's finest handbuilt bikes are now made in North America. The craftsmanship on show was truly outstanding but there were also a good number of quirky bikes.
Fixed wheel bikes (fixies) were much in evidence and there were some beautiful examples. The one that caught my eye though was the bike with two complete transmissions, one on either side of the bike. 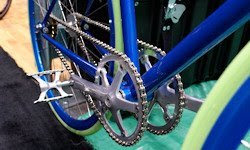 When I asked the guy manning the booth what the idea was I was told that the second transmission was a safety measure that would come into play should a chain break or get unshipped. Normally with only one chain of course there is no means of stopping as the modern "fixie" rider wouldn't dream of installing a brake. Without brake or chain you are completely snookered. The thought of plummeting downhill with absolutely no means of stopping is somewhat unnerving. Rather than be seen with a brake these guys install two chainwheels, two chains and two sprockets. I shook my head in disbelief.

However it got me thinking about another bike I'd seen with a similar set-up but this one made a lot of sense. In 1982 Canadian rider Jocelyn Lovell rode the kilometre time trial at the World Championships in Leicester, England using a bike with two transmissions. His arrangement gave him two gear ratios, a lower gear to get away from the line and a higher gear that kicked in after about seventy metres. His ride in Leicester wasn't as good as he hoped for but the transmission worked well and it could not be faulted by the UCI commisaires. 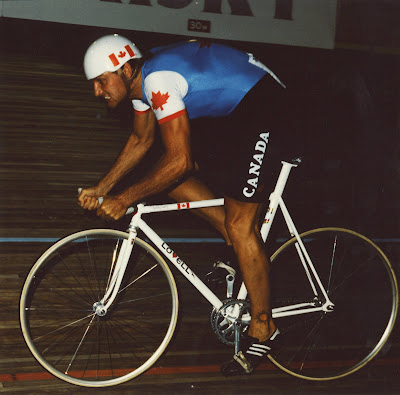 Jocelyn's bike had a freewheel sprocket on the normal right hand side and a fixed sprocket on the left hand side. As he moved away from the line he drove through the RH sprocket and the left hand fixed sprocket began to unscrew from the hub. It being of smaller diameter it turned at a slower rate than the RH sprocket and being on the "wrong side" of the hub it would naturally unscrew. After about seventy metres the LH fixed sprocket came up against the lockring and at that point drive was through the LH side and the RH sprocket freewheeled. The distance traveled before the higher gear engaged could be adjusted by setting the position of the lockring. The bigger the space between lockring and sprocket at the start the longer the distance before the higher gear engaged.
Jocelyn experimented for some considerable time to come up with a combination of sprockets and chainrings that would not only give two suitable ratios but that would need chain lengths that would be at the correct tension. He settled on a low gear of 42x13 (87.2") and a high gear of 53x15 (95.4")

Jocelyn's two-speed transmission worked well but it was only one of the innovations that he tried. Note that in the above photograph he is riding a low profile frame, which he had built himself, fitted with "cow horn" handlebars and an extended seat tube connected directly to the saddle. All this was quite revolutionary in 1982. Tragically he was denied the opportunity to try it to it's full potential when he was hit by a dump truck in 1983 and paralyzed. That dump truck finished the career of one of Canada's finest athletes.

More about the fabulous cycling career of Jocelyn Lovell in a future blog.
Posted by Bicycle Specialties 12 comments: 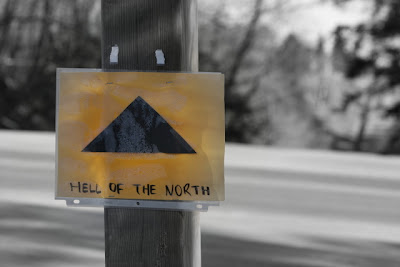 The 2009 edition of Toronto’s Paris-Roubaix Challenge was a great success. Credit must be given to Heath Cockburn and Ed Veal of the promoting club La Bici Squadra for resurrecting the event after a lapse of a few years. They laid on a great event with plenty of volunteers to help with marshalling, registration and all the other jobs needed with an event like this. Thanks must also go to Rapha for their sponsorship.
The Hell of the North, as the event is now called, was over 95 kms of tough roads and tracks north of Toronto. Weather at the start was dry but cold (-2 degrees C) and there was a strong North West wind that the riders had to battle into for the first forty km. 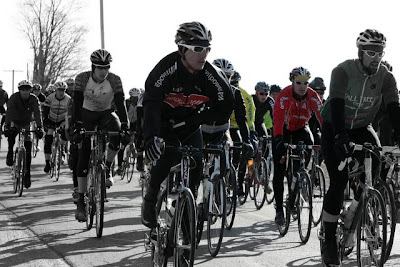 There were four "sections" of really rough going for a total of about 20Km. The first section was under about a foot of ice-cold water on the day but was better than expected as the air temperature was below freezing. This made the mud at the sides a lot firmer than it had been the day before when the temperature was ten degrees Celsius and the mud was ankle deep. 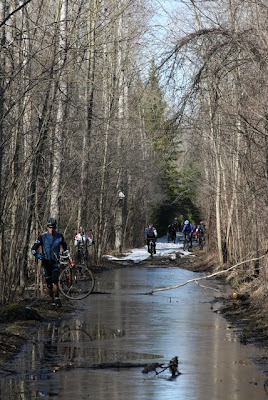 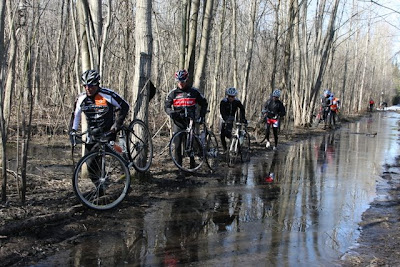 Section two is the infamous "Trench", fourteen kms. of old railway bed. It was quite fast as the mud was frozen and the wind was at the riders backs but there was still some open water. 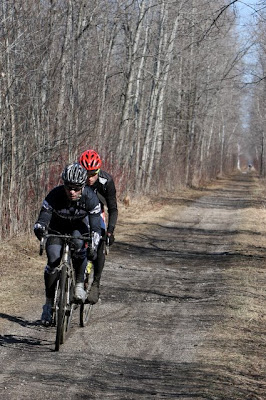 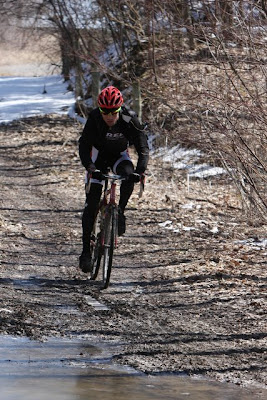 Sections three and four, each about 1 km long were just about unrideable by most of the field but the lead guys seemed to manage OK. 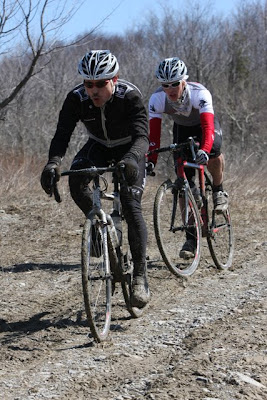 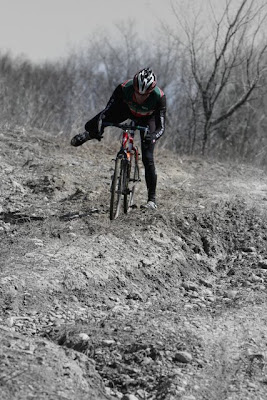 An originally routed fifth section through the Durham Forest had to be bypassed due to access problems. However I’m sure that most of the riders were not too upset about that.
Fastest on the day was Cam Jette who got around in 2 hours 55 minutes. That is 32.4 km/hr, not bad under the circumstances. Almost all of the 95 that started finished although the last were at least an hour and a half slower than Cam. The temperature didn't get above freezing for the duration of the event.
Amazingly everyone I spoke to thought it was great and many asked if a similar event could be run in the fall.
Make it tough and they will come back asking for more.

Thanks to Peter Kraiker for the above photos.
Go to his web site http://studiofstop.com/store/Ontarios_Hell_of_the_g99.html for more photos of this event and many others in Ontario.
Posted by Bicycle Specialties 2 comments: