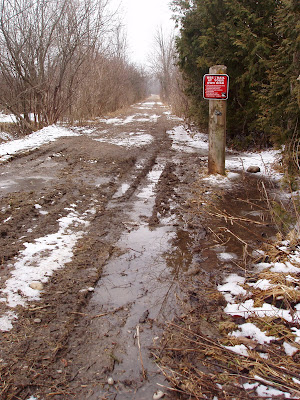 The entrance to section 2. The "Trench".


Cycling is appealing to most because of the challenge. On a bike we can venture to new places, see unique environments, and push our bodies to the limit. The pain brings the accomplishment, which brings joy. Together with others the sense of elation is greater which is why I have always found an attraction to the toughest rides.

I organized the first “Toronto’s Paris-Roubaix Challenge” in 1988. For a few years I had been organizing randonnees for the members of the Toronto Randonneurs and had become somewhat unpopular for including stretches of gravel roads in the routes. My philosophy was that if the only choice was between a busy highway and a gravel road the latter was safer and preferable. Some members disagreed with this and many heated arguments occurred, particularly when a “secret control” was situated on a gravel section and those that avoided it and took the busy highway were listed as DNF (did not finish). However many other members agreed with my choice of routes and discussion began on the possibility of a route solely on gravel. And so the “Toronto’s Paris-Roubaix Challenge” was born. A route was selected starting at the Toronto Zoo, which is just north east of the City and finishing in Jackson’s Point, about 70 km North on the shore of Lake Simcoe. Jackson’s Point was chosen, as that was the location of the Irish House, a pub owned by John Watson and his son, local legend Sammy. Sammy had been one of Canada’s top riders in his day and knew all the roads and tracks in the area south of Jackson’s Point. Sammy and I got together and routed a course that took in all the worst roads and tracks between Toronto and Jackson’s Point.

The first event was a great success. Those that rode it really “enjoyed” the challenge and a challenge it is. The toughest section is a 14 km length of old railway bed. The tracks have been removed but the surface is a mixture of railway ballast and sand. It soon became known as the “Hell of the North”.

The Irish House was a perfect place to finish. By the time the riders arrived John and Sammy had a large log fire burning and the place had a marvelous welcoming atmosphere. On a couple of occasions Sammy arranged with the nearby physiotherapy college to have a fully staffed massage room available for the exhausted riders.

The event has always been run on the same day as the real Paris-Roubaix in France, which is usually the second Sunday in April. Southern Ontario’s weather can be almost anything in early April. I organized the event from 1988 until 2002 and during that period we had everything from bright, warm, sunny days to snow and probably the worst, freezing rain. One year I rode the event with my son Michael who was about thirteen. In those days I was still a bit stronger than Michael but on the “Hell of the North” section he fell way behind. I stopped and waited and eventually he caught up carrying his bike. The wheels would not turn; they were completely jammed with ice. There had been freezing rain since the start and both riders and bikes were covered in ice. Ice on each spoke was about 1 cm thick. With the help of a wrench we were able to chip away at the ice to get the wheels turning but this took some time. While chipping away at the ice beside the track we were passed by many riders one being a well-known local official and race organizer. On seeing me he shouted, “ This is the most stupid f-ing event I have ever heard of. You are f-ing mad”. However when we got to the finish and into the warmth and welcoming atmosphere of the Irish House, he came up to me and complimented me on a great event and said that he hoped that I would run it again the next year.

And that’s how it has always been. The tougher it is the more satisfaction riders seem to get from it. After the Spring 2000 event many riders came up and asked of I would put one on in the fall. After much deliberation I decided that we would put on the “last and toughest event of the millennium”. This event was to be out and back, covering a similar route as the P-R on the way out and incorporating a lot more abominable roads and tracks on the way back. Total distance was 148 km and it would be on the first Sunday in December. December is not recognized as being the ideal time of year to be cycling in Ontario. Most riders have put their bikes away for the winter. The weather can be awful and so it was. We had had a very wet spell, which produced many very muddy patches and puddles on the tracks. Then a couple of days before the event the whole lot froze. Deep puddles were now covered in a sheet of ice, which made riding impossible and running very unpleasant. Wet snow fell all day and the last finishers didn’t get in until after dark. However most riders finished and all agreed that it had been a great event. I organized both spring and fall events for a couple more years but quit after 2002.

For one or two years the Midweek Club organized the Spring event and then the guys at Cervelo had an “invitational” over the course for a couple of years. Many people asked me to put the events on again but I decided against it. This year however, Heath Cockburn from La Bicicletta approached me and asked if I would help him to organize it. He had been approached by the English clothing company, Rapha to put on an event that would fit into their schedule of tough events around the World. Heath immediately thought of Toronto’s Paris-Roubaix Challenge. On April 12th this year the event will go again. Heath is calling it the “Hell of the North” and it will be. It will start and finish at Musselman Lake, a few miles north of Toronto and will cover 95 km of the toughest roads and tracks that we can find. There are five “sections’ of really rough track including the fourteen kilometers of old railway bed which has now become known as the ‘Trench’. Many of the roads that were gravel in 1988 are now paved so there will be many quite fast stretches but we have managed to find some steep hills, which should add to the challenge.

The ideal bike to ride will depend a lot on the weather in the preceding week. I have ridden it on a good dry day with 23mm road tires but the best choice is usually a cyclo-cross bike with a large section road tire. Knobby tires are probably a bit slow on the fast stretches as are mountain bikes. However don’t get stressed out with the choice of equipment just use what you have and enjoy it.

Those masochists amongst you that feel like a real challenge this early in the year go to: /labicisquadra.com/hellofthenorth.html for details.


The following are photos of the course taken recently. Conditions will probably be better on April 12th. 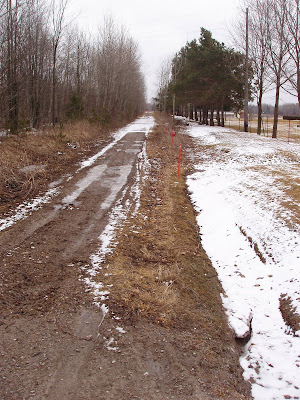 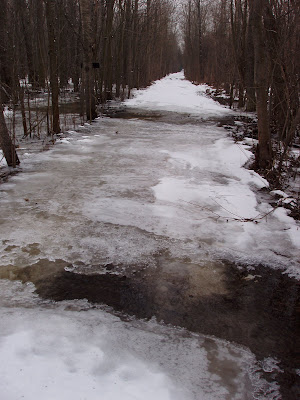 Exit of section 1. Probably most of the ice will be gone by April 12th. There are some quite steep but short hills. 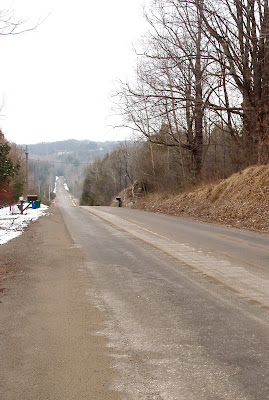 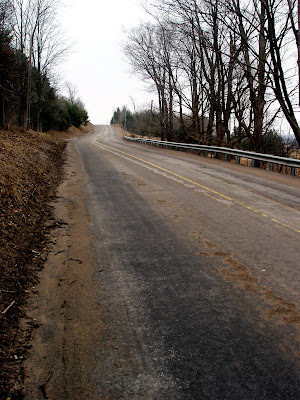 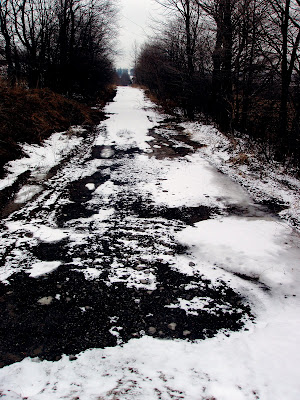 Exit of section 5. Only 4 km from here to the finish.
Posted by Bicycle Specialties 10 comments:

Velocolour and the Cinelli win at NAHBS

Noah Rosen (Velocolour) won the award for the "best painter" at the recent North American Handbuilt Bicycle Show in Indianapolis. Noah’s finishing of my old 1951 Cinelli, which was featured in my post of February 24, was greatly admired by many at the Show and the judges awarded Noah with the top award for his effort. 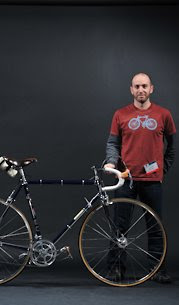 Noah with the Cinelli.
Posted by Bicycle Specialties 2 comments:

Steve Saines, who regularly comments on my posts, mentioned the elegance of the old steel Stronglight cranks on my Cinelli. I don’t think that there is any doubt that the old cranks were much nicer looking than those of today; however steel cranks have two things going against them: first they are quite heavy, about 50% heavier than a similar alloy one and secondly they wear much faster than the alloy equivalents. As odd as it seems the square tapered hole, which mates with the b/b axle, wears very quickly. The cranks on the Cinelli (mentioned in my last post) have worn so much that a have had to grind about 5mm off the end of the axle to allow the cranks to pull further on. The reason is, I believe, that the aluminum cranks mate much tighter onto the steel axle, the steel bedding into the aluminum eliminating any chance of play. This doesn’t happen with the steel cranks and any slight difference in the mating of the two will quickly develop into wear.
The problem was also common with other steel cotterless cranks. The old Gnutti steel cranks, which fitted to a tapered spline on the axle, were really notorious.

Race leader Ken Russell very nearly lost the Tour of Britain in 1952 when his Gnutti crank came loose on the last stage into London. Belgian rival, Marcel Michaux saw his plight and offered Russell his bike. Russell finished on the Belgian’s bike and retained his yellow jersey.

The only steel cotterless cranks that don’t seem to have had this problem are the old CCM cranks. Maybe it is because the taper on the axle was much steeper, or perhaps the machining of cranks and axles was more precise.

Of course most of the old steel cranks used cotter pins. I don’t think any of us want to go back to those. It seems very few mechanics have the necessary skill to fit cotter pins correctly these days. There were, however, some beautifully made cottered cranks. The British Chater Lea, Williams and BSA were outstanding as were the French Stronglight and Duprat. The Italian Magistroni steel cottered cranks were standard on all the top Italian bikes until Campagnolo introduced their alloy cotterless cranks in 1958. The best of all, in my opinion, were the French Duprat which had hollow steel arms. Their weight was very little more than alloy ones and they were quite elegant.

Recently I have seen steel cotterless cranks on cheap department store bikes and on high end BMX bikes. It would be interesting to know if they stand up well.

Steel chainwheels don’t seem to last any longer than alloy ones either. The thought here is that the chain beds itself into the aluminum to make a precise fit similar to the cranks and axles and very little wear occurs thereafter. This doesn't seem to happen with the steel rings. Another explanation put forward is that road grit gets bedded into the aluminum and forms a very hard surface. Does anyone else have an explanation?

Here are photos of a few cranks in my collection. 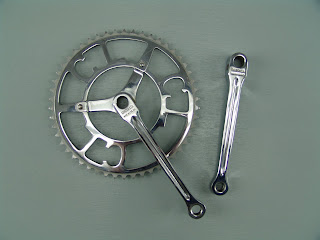 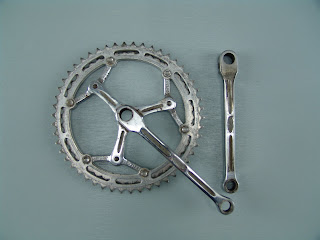 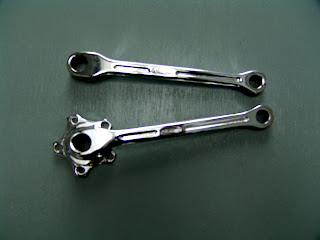 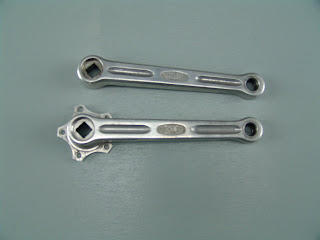 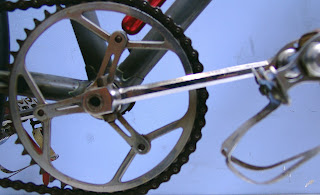 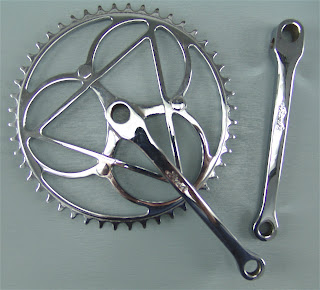 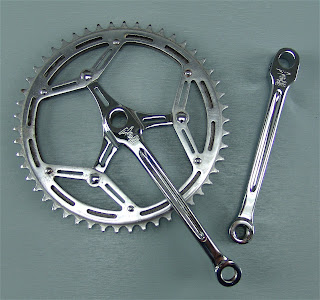 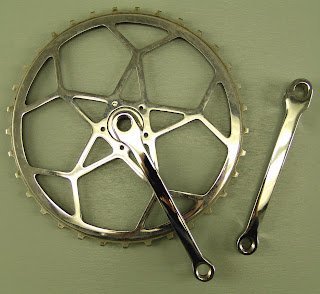 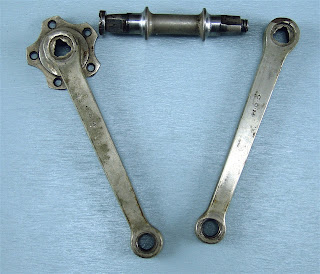 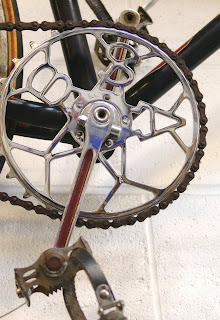