The Boards of Delhi and London.


I’ve just spent the last few days in London, Ontario. I had hoped to get out for a couple of rides with some friends to see some of Ontario that I am not too familiar with but as it turned out I couldn’t meet up with them and rode on my own. The country around London is pretty flat and as I rode the straight roads across the windswept farmland I was reminded of the roads in northern France and Belgium. The cobbles are missing but there are plenty of rough gravel roads that at this time of year, just after the snow has gone, are almost as much of a challenge as the pave of Europe. 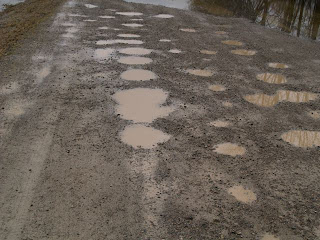 Not Belgian cobbles but almost as tough to ride.

Maybe it is because of the similarity with their homeland that Belgian immigrants settled into this area. Delhi (pronounced Del-high) is the centre of the Belgian community and was at one time a hub of bike racing in Ontario. The first bike race that I saw after arriving in Canada in 1964 was in Delhi. The main street was closed down for the race and the large crowd was obviously knowledgeable. Compared with the races I had ridden in England this was so much more exciting. Bike race spectators in England were almost exclusively connected in some way with the riders. Here they were all local residents, mostly farmers and their families, often shouting encouragement to the riders in Flemish.

Over the next few years I made several two hour drives to Delhi from my home in Toronto to not only race in their local criteriums and road races there but also to attend their winter socials at the Belgium Hall where roller racing would be the main feature.

In 1972 the bike racing fans of Delhi built a velodrome in the local hockey stadium. Of course, even in Delhi, hockey is the number one sport in Canada but during the summer the arena wasn’t being used too much. Locally they had an expert at building velodromes: An ex-six day racer himself Albert Coulier had previously built fourteen velodromes in Canada and the US during the hey day of six day racing in the forties and fifties.

The velodrome in Delhi that Coulier built was fantastic. Constrained by the available space of a hockey rink it was short and steep--118 metres with bankings at 55 degrees-- but it hosted some of the most exciting bike racing one could see anywhere. Renowned British cycling journalist Jock Wadley came to Delhi to see a six day event and wrote a glowing account of it in his book “Old Roads and New”. Jock had seen racing all over the World from World Championships to Six Days at the Paris Vel d’Hiv to nineteen Tours de France. Jock said that the racing at Delhi was “the most exciting, most adventurous, most spectacular cycling scene I have encountered in more than 40 years association with the sport”.

Delhi could not, of course, attract the professional riders but it did attract most of the better amateurs from Canada and the States. The stars of Delhi were Canadian Jocelyn Lovell, ex Brit. Chris Hooker, American Roger Young and local riders such as Pete Penman, who was an expert on the steep boards of Delhi.

Sadly, the Delhi Velodrome lasted only a few years. The new generation of Delhi residents were not as keen on bike racing as their parents and other summer uses were found for the hockey arena. The Delhi Velodrome was dead but by no means forgotten.

Thirty years later in 2005 a similar hockey arena became available in London. The local hockey team had moved to a new facility downtown and their old arena was standing empty. Local bike racing enthusiast Rob Good saw an opportunity, approached the owner and a deal was struck. Albert Coulier, now in his eighties, agreed to come out of retirement and design the track With the aid of Albert’s two sons and their company, Apollo Construction, the Forest City Velodrome was born. 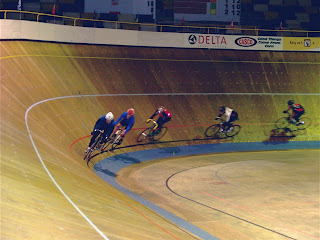 The track is a work of art, a beautiful wooden bowl; Rob Good’s Field of Dreams. At 138 metres around it is a bit larger than the old Delhi track and perhaps a little easier to ride. The curves are banked at 50 degrees and the straights at 17 degrees. It is certainly quite intimidating and so far I haven’t summoned up enough guts to get on it; however, I am put to shame by the crowd that I have seen racing and training on it. There are riders of all ages from ten year olds to one fellow in his eighties looping around at speed. What a joy it is to see those little ten year olds flying around the top of the high banking without a fear in the World.

Rob Good, his wife and a large crew of volunteers have transformed a more or less derelict arena into a wonderful sports facility. When they took the building over there were numerous burst pipes due to a previous tenant being unwilling to heat it over the winter. The place was dirty and in need of paint. The volunteers have now fixed most of the problems and it is a great place to spend some time be it racing, training or just watching. There are teaching and training sessions everyday where complete novices are taught the basics and soon become confident on those intimidating bankings. 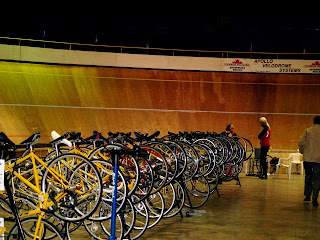 There are plenty of bikes available to borrow.

Unfortunately even for the most exciting racing sessions spectators are sparse. Maybe that is because Canadians are too much into hockey and have no time for anything else. Maybe it is a lack of advertising. Whatever the reason, it seems a shame that people are missing out on a good evening’s entertainment. One group that never misses a race meet is the “Delhi Ladies”. A group of elder ladies from Delhi that remember the old Delhi track and know just how exciting the racing can be.

The others that seem to be staying away are the road racers. With Canada’s long winters one would think that the opportunity to train indoors would attract a good crowd. What better place to get in a few winter miles and sharpen up your bike handling skills than at the velodrome.

However even without the crowds of spectators and the road racers the Forest City Velodrome seems to be flourishing. There is a very enthusiastic youth group and a large group of regulars that put on exciting racing. If you get a chance pay them a visit I’m sure you will be equally impressed as I am.

For information on the Forest City Velodrome go to: www.forestcityvelodrome.ca