A memorable ride in the Alps (part three) Michael's version.

The following is written by Michael Barry (jr) now a successful pro in the European peloton.

The trip to France with my father, aunt and uncle in 1984, and more precisely our ascent up Mont Ventôux, marked me in a way no other trip has; it not only introduced me to Europe but in many ways turned my childhood dreams into reality. I had read about the Tour and the famous climbs and races throughout Europe daily for several years before we took off for France. I had visions of what it would all be like and wasn’t disappointed but captured. I had read about Simpson on Ventôux, had seen the photos of him struggling to climb back on his bike before finally collapsing, I knew the difficulty of the climb, its volcanic history, its mythic and mystic environment and anticipated our ascent as most children would a trip to Disneyworld. 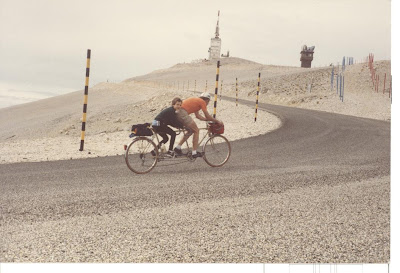 As a very young child my father took me on some great adventures. Never one to take the quickest route anywhere, he opted for the most interesting. As a teenager, he had traveled to Europe from England (a short crossing now but one, which at the time, was unfathomable to most Brits) to watch his childhood idols race their bikes in the mountains. He rode through the countryside with friends experiencing moments on his bike that few others experience in a lifetime. A few years later, as a twenty year old, he returned on a Lambretta scooter, with his girlfriend, to cruise around again. Today, these journeys seem trivial in a world that is accustomed to flight and travel, but at the time, for a young lad from London they were monumental.

Over the years we have enjoyed some great journeys together--from the Netherlands to Quèbec we have seen some beautiful countryside on our bikes. But the ride up the Ventôux touched me in a way the others have not.

On the morning we were to climb my father woke me up in our hotel room--a small attic room in a quaint hotel in Sault. I had slept a little longer and he had made a quick trip down to the patisserie to buy a Milles Feuilles for my breakfast. I sat it bed, munched away scattering crumbs, while he read the paper. As we age, we begin to savour food for the memories it incites--decades later, when I bite into a similar pastry, through the icing and the layers of flaky dough, into the creamy centre, I am brought back to that morning.

In France, I was enchanted by Orangina, baguettes with pâté, and flaky croissants with jam. We ate simply but we ate well. We stopped in cafés, we dined in fine restaurants and we picnicked in fields. After visiting a vineyard we picnicked between their vines. Energetic from the meal I played in the dirt while my aunt, uncle and father slept off the wine.
In our hotel room, on the bedside table, beside the small lamp and pastry, was our highlighted route on the Michelin map. Each night, after dinner, we would lay in bed together and sketch out the next day’s route. In haste I would choose the shortest line from A to B but with my Dad’s guidance I learned that we were in search of the smaller roads with less traffic and better sites. Still today, when I pull out a map to plan a route I think back to those nights. The smaller the road the better as long as there is a good cafe along the way.

Nearly twenty years after we rode up the Ventôux I ascended it again during the Dauphiné Libèré. Nothing had changed. I felt as if I was on the back of the tandem again, with my Dad as captain, encouraging me. Each kilometre of road flashed before me like a snapshot from the past--the irritatingly loud crickets buzzed as they had in ’84, the gradient over the first ten kilometres absorbed my energy as the bike slowed before I broke into the open where the gusting dry wind pushed me out of the corners. I could still hear my Dad’s encouragement as we rode past the Châlet Renard, “We’re almost there. This is roughly half way.” Despite not being in contention for a decent result in the race I rode at my own tempo to experience and embrace the moment. I wanted to be alone in my effort so I rode past riders who pedalled slowly as they were only concerned with making it to the finish and I persisted until the end. Like a song brings back the emotions of a teenage romance the ride brought me back to that day with my Dad.

As I passed the memorial I glanced over my shoulder and then refocussed on the road ahead and the spaceship like tower which pierced the sky at the summit. For my father, Simpson was a fallen hero who had died tragically on the bike. For me, distant from Simpson's career, the memorial was a memory of the day I rode with my Dad, uncle and aunt. I now understand Simpson's story of complete sacrifice for victory. 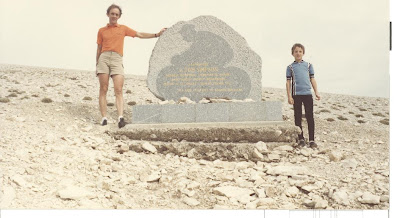 In 1984 I lived the first part of a dream which has now become reality. In the last twenty years I have ridden throughout the world and never forgotten the essence of what my Dad taught me as a kid: to seek out the smaller, more interesting roads. For years I saved the piece of tubular we had found at the roadside as a trophy from our ascent. And, I imagine it is still somewhere in the boxes of my childhood possessions amongst the Legos, marbles and HotWheels. 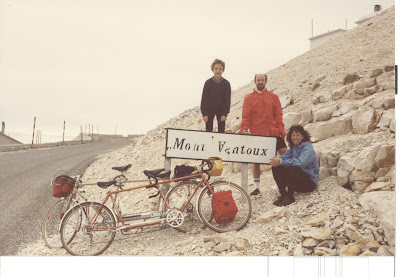 Michael, Ralph and Trish at the summit of Mont Ventoux